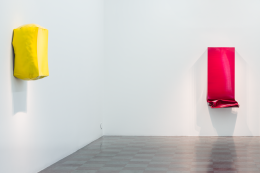 In many works, we become painfully aware of Angela de la Cruz's personal destiny. After she had a brain haemorrhage a few years ago, she became wheelchair bound, and her body has become the reference point for many works. The Throw series hints at her former and new body length and over the biggest work in the exhibition - Drop - runs clear wheelchair tracks. This large painting, which is sunk on the floor, has a glossy mirror surface, and appears to be soaked in water. However, the bright red edge shows that it has not fallen into the downside, but clearly marks the presence and integrity of the work.

If Angela de la Cruz's earlier works could see a strong element of aggression and destruction, it is the idea of ​​healing that is turned off in her new work. The wounds and deformations of the artworks have been repaired and become an integral part of a new body, new works. Her creation has always been psychologically charged, and it is of course not difficult to see autobiographical elements in her latest work.

Download the text about 'Vacant' by Magnus af Petersens 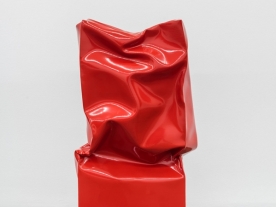