Jaana Alakoski
We Are Playing, 2016 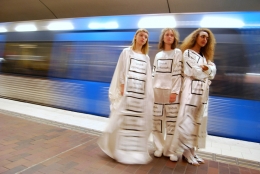 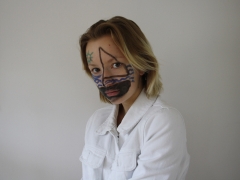 Kobolt is showing its first exhibition in the Project Space at Wetterling Gallery. Kobolt is an artproject run by Klara Andersson Åsman and Sara Åkerman Börje, with the ambition of being a creative channel for young artists and creators. The exhibition features three young artists with works in the interface of a digital and physical existence. Participating artists are Jaana Alakoski, Nina Kihlborg and Hanna Westerling.

We are moving through the interface between a digital and physical existence. Our perception of the world is largely characterized by our digital presences. It manages our knowledge intake, our social interactions, and exploration of the Self as well as the making of our own identity. We could at the same time argue that these phenomenons occur in opposition to each other, where the digital and the physical contrast one another. The Internet plays a big role in today’s increasingly globalized world. It manages to connect and create social relationship between national borders. Dissemination through the Internet can occur quickly – you reach further and to a wider audience, where it’s possible to include people or just as easy to disregard your audience. At the same time, the phenomenon is so brutal in its rampage that it creates a world of its own, which to some extent develops new social structures, norms and rules. By using social media networks we are able to explore, develop and play with our identity. If seen from a superfi cial perspective – this could be a way for us to control the images that represent the Self. On a deeper level we could argue that the manipulation of identities offers various versions of identity. The upholding and creation of different identities could consequently result in a gap between the two realities – where each new context manages different norms and controlling structures. Eye contact investigates the social interaction that occurs between a digital and physical existence. What we see, meet and choose to do in this interface are the cornerstones of the exhibitions investigation. Eye contact is based on a cursory of a contemporary approach to digital and physical interaction. These three young artists explore the perception of the Self in order to create identity.

Jaana Alakoski (b.1992) We’re Playing
Originally from Stockholm, Jaana Alakoski lives in London where she attends Central Saint Martins Collage of Art and Design, studying a bachelor in fine arts. Jaanas work often originates from photographs or videos of herself, she uses digital techniques to distort reality as well as the matter of consciousness as she creates her new self-images. It’s a performative game and a way to enter different roles.

Nina Kihlborg (b.1994) Face Paints
Born in Stockholm, Nina Kihlborg is now based in London where she attends Wimbledon College of Art. In 2018 she will have a Bachelor's degree in Fine Art: Print & Time based media. Nina creates visually manipulated self-portraits, using digital software such as the apps on her phone to construct new images and the possibility of self-exploration.

Hanna Westerling (b 1991) Undvik ögonkontakt
Hanna Westerling is a Stockholm based textile student at Konstfack University of Arts, Crafts and Design. In her work she focuses on conceptual fashion and challenge and investigate norms. She finds inspiration from various materials, but also by using different techniques or the framing and by analyzing a certain question.

Wetterling Gallery’s Project space is a platform for art projects additional to our main exhibition space. With these projects we want to provide a space for other expressions and contributors in the art scene.
Together with Kobolt, Wetterling Gallery wants to broaden the perspectives and lower the thresholds by showing young artistic concepts.