Wetterling Gallery is proud to present its ninth exhibition with the American artist Frank Stella.

In the exhibition Recent Work Stella is presenting his latest work in the series Scarlatti Kirkpatrick which he began working on in 2006. Alongside these works he will also present a few older works from the 80’s and 90’s.
Stella has during his long career moved from being a minimalist to a maximalist and the sculptures presented in the exhibition is vivid, colorful and filled with movement. He never stops developing and he never stops to surprise us.
Stella is considered to be a pioneer within the minimalist art movement and one of the most influential painters of his generation, a generation moving from abstract expressionism towards minimalism. In his early work Stella tried to reduce all external content leaving only color and the canvas to the viewer. His famous quote “What you see is what you see” became the unofficial credo for the minimalist art movement. 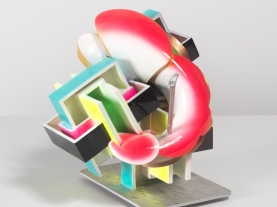