Fredrik Nielsen (b. 1977) is the poster boy of cool rebellion, rocking an attitude that makes Swedish contemporary glass beat with a pulse. Stimulated by aspects of popular culture, Nielsen assimilates graffiti, music, videos and performance within his practice as a glass artist creating a form of kitsch that is continuously experimental. Improvisation has fueled his inspiration for pushing the material boundaries of glass beyond something banal and he is not afraid of taking risks to establish his own artistic license.
Many of his sculptures are embellished with statements that challenge the hierarchies within art and these concepts were expressed in an installation titled WannabeArt which was part of the exhibition Forms of Seduction at Wetterling Gallery, Stockholm in 2009. Some of the outspoken works featured were Fine Art Light (2008) and Svensk Form (2008), both critical reflections on Swedish aesthetic expectations. In June 2010, Nielsen utilized the performative aspects of the practice during a 10 day circus event titled, CATCH! at Kosta Boda. Nielsen’s flair for improvisation was put into action, fueling the direction of a sculpture which became more eccentric as the show progressed with acrobatics and live music. In the end, the sculpture represented a three dimensional expression of that evening’s energy. Through his ardent process of experimentation and colorful accessorization, Nielsen creates glass forms that completely destroy the ideas of standard normality. Instead, the unconventional emerges as a powerful statement and his attitude of rebellion becomes a refreshing break from tradition reaching out to alter viewer expectations. 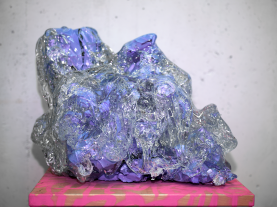 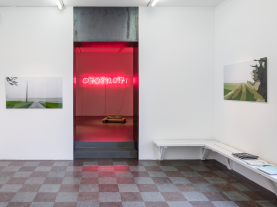 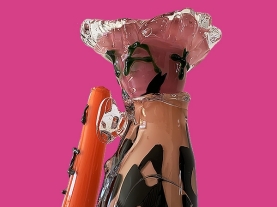